Construction of a block #2 winter greenhouse in the area of 8.8 ha 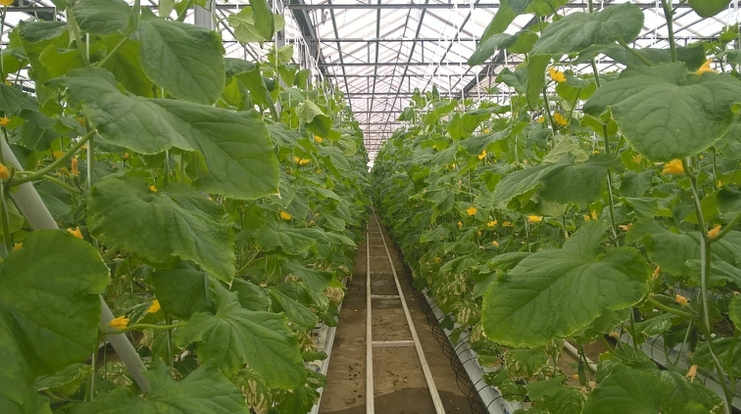 Project name: Construction of a block #2 winter greenhouse in the area of 8.8 ha.

The project was implemented in the territory of the Saratovsky Municipal District.

The investment project was competitively selected and included on the list of support recipients of the Ministry of Agriculture of the Russian Federation in 2017.

In 2016, the “REHN” produced over 9,000 tons of cucumbers and tomatoes, which amounted to almost 30 per cent of the total amount of closed-ground vegetable products in the Saratov Region. A new area of modern greenhouses built on Dutch technology is being introduced every year for almost six years, thus ensuring the production of environmentally friendly products.

For example, in 2013 6 hectares of modern greenhouses were introduced in five months. Next year, another 1.5 hectare. The first experience of cultivating lighting cucumber was realized here. 2015 was the year of planting a 4-hectare intensive garden on the territory of the production complex.

The design of the construction site was carried out in 2015, and in the spring of 2016 basic structures began to be erected: four greenhouses of 2.2 hectares, integrated into a single production complex with its DH station, its own special item of water supply in a closed system with the installation of pumping plants to supply fertilizers and protective equipment. The entire module is computerized and can be run in automatic mode. Control such a modern set of 3-4 operators, plus four growers brigades. When the new greenhouse complex was put into operation there were created 120 new jobs and in total the “REHN” team now employs more than 400 people.

Bagiev Rasim Hajibaba Oglu, Director of "REHN", said: “The new greenhouse increased the height of the structures up to 5 metres, special glass "float", which is used as a coating for this construction can skip more than 90% of the light, allowing a culture productivity increasing. In the greenhouses, the generator supplies carbon dioxide, so we help the plants to breathe more actively. Cucumbers and tomatoes grow perfectly in a coconut substrate soaked in a special nutrient solution. Another difference fr om the previously built greenhouses, wh ere we have floor trays with substrates. In the new greenhouse we picked up the trays, made them metal-pendants. It's technologically better. And of course, all the power functions of the root system are managed by the computer, which allows for the creation of an optimal microclimate for grown crops".

The total area of the greenhouses is now more than 28 hectares. With the introduction of new areas, it is planned to increase production of vegetables to about 12,000 tonnes per year.

Such approaches of the region's economy management will be able to avoid the seasonal interruption of the production of the closed-ground vegetables and provide the Saratov market with a high-quality product at reasonable prices.

The geographical distribution of the interregional supply of vegetable products with the trademark of LLC "REHN" is expanding. Today the first harvest of cucumbers is already going to Moscow, Ufa, Sverdlovsk. There are also applications from the northwest cities of Russia, such as the Kaliningrad Region.